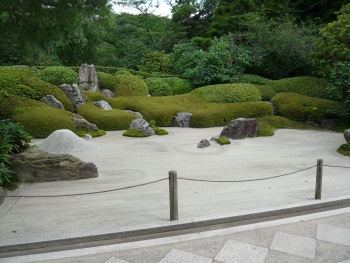 The Temple is located only 5 minutes by foot from Kita-Kamakura station. The flower that makes this Temple famous is the hydrangea. Over one thousand hydrangeas are in full bloom during the rainy season from mid-June to mid-July. As the Temple is very crowded on weekends during this period, visiting on weekdays is recommended. The Temple has a dry landscape garden with sand, rocks and trees. Unlike Kyoto, Kamakura has only three temples with a dry landscape garden. Among these three, this temple’s garden is considered the most attractive.

The Temple is located 5 minutes by foot from Kita-Kamakura station. This temple was built as a convent by the wife of a powerful samurai leader late in the 13th century. The convent worked also as Japan’s first refuge for women who wished to escape from their abusive husbands. This continued until the late 19th century. The Temple is famous for many kinds of flowers, especially irises, which bloom during the rainy season.

The Temple is located in front of Kita-Kamakura station. In the late 13th century, during the Yuan dynasty, Mongolian troops attacked Japan twice when Tokimune Hojo of the Kamakura Shogunate was the de facto ruler of Japan. Japanese troops repulsed the Mongolian troops but a large number of samurai and soldiers were killed. Tokimune Hojo founded this Zen temple to console their souls including those of the enemy’s although, like other temples in Kamakura, it was destroyed by fire many times. The Temple is a typical Zen temple, ranked second among the top five Kamakura Zen temples. Located within the Temple are majestic buildings, Buddha statues, Japanese-style gardens and national treasures such as an old bell and the oldest Chinese-style building in Japan, called Shariden.

Jochi temple is one of the most popular Zen temples ,ranked fourth in the great five Zen temples in Kamakura. It is located only 5 minutes from Kita-Kamakura station.    At the entrance, there is a well, called ‘Kanro’, said to be one of the Ten Celebrated Wells in Kamakura.   Unique is the two-story main gate with a bell on the second floor. No other temples in Kamakura have this kind of structures.       In the Donge-den hall, three wooden statues of Buddha are enthroned on the central altar as the main objects of worship.    In the backyard, there are flower gardens, bamboo forest, graveyards and yagura, or caves. Kamakura did not have enough space to accommodate cemeteries. Instead of building cemeteries, their ashes  were placed inside those caves.  In one of these yagura is a statue of Ugajin a figure of a coiled serpent with a human head on top of it. Also enshrined in a yagura is a stone statue of Hotei or the God of Contentment and Happiness, holding a big bag on a big berry and a fan.