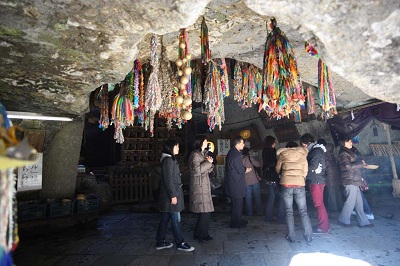 Zeniarai Benzaiten  is a Shinto shrine ,located 20 minutes on foot from Kamakura station. In spite of its small size, it is the second most popular spot in Kamakura after Hachiman shrine. Zeniarai Benzaiten is popular among tourists because the waters of a spring in its cave are said to be able to multiply the money washed in it. The object of worship is a deity which fuses a traditional spirit called Ugafukujin with the Buddhist goddess of Indian origin Sarasvati, known in Japanese as Benzaiten.  You wash your note such as 1000Yen or 10,000Yen note and you keep it for a while and then you are supposed to use it.  Some while later you might get a lot of money. You can also enjoy strolling through a typical residential street of Kamakura before you reach the shrine from Kamakura station.