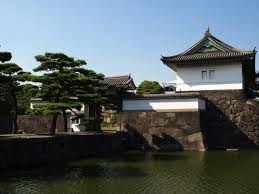 The Imperial Palace used to be a castle for shoguns. Shoguns led the samurai class during the Edo period (1603 -1867). The original meaning of shogun is “general”. In 1868, the Meiji Restoration occurred and the last shogun transferred this castle to the Emperor Meiji. The total area of the Imperial Palace including the gardens is about three square miles.

Previously, there was an outer and inner moat surrounding the castle. The Palace today is still surrounded by an inner moat. As you approach the Palace from the front, you will see two bridges and the main gates. The gates are opened to everyone twice a year: January 2nd for the New Year celebration and December 23rd which is the Emperor’s birthday. On these dates the Emperor and his family will appear on a balcony which looks down upon a huge crowd waiting in the front garden.

The East Garden is open to everyone year-round except for Mondays and Fridays. The main gate of the Garden is called “Otemon” which used to be the gate through which all feudal lords (Daimyo) had to walk. The lords and their retainers (servants) were searched before entering the castle and carefully watched by samurai guards sitting in their Guard House. The site of the East Garden used to be the central part of the castle and included the Shogunate offices, the Shogun’s private quarters, and his harem which was called an “Ooku”. The foundation of a Donjon (main tower of a castle), several guard houses, a tea pavilion and a Japanese garden in which you can stroll remain as they were originally.

Closed: Mondays, Fridays, New Year Holidays (Dec 28 to Jan 3) If Monday or Friday is a national holiday,the gardens are closed on the following day instead.